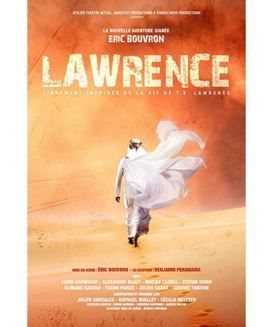 Freely inspired by the life of T. E. Lawrence

World War I rages. In the Arabian desert, at the time controlled by the Ottoman Empire, an ally of Germany, the future of the entire Middle East is at stake. Thomas Edward Lawrence, passionate about Arab culture, whose language and local dialects he masters, gains the trust of the Arabs, who now consider him one of their own.

The success of the operation to sabotage the Hejaz railway, led by the tribes and commanded by Lawrence, reassures the Arab leaders about the British commitment to the cause that the West itself has suggested to them: that of the creation of a united and independent Arab nation. But what Lawrence does not know is that the French and British governments have already secretly signed the Sykes-Picot agreement, which provides, once the war is won, for the carving up of the region for their sole benefit...

How far will Lawrence's loyalty to his brothers-in-arms go when he measures the extent of the orchestrated lie?

How to get there?

As part of its CSR approach , Viparis wishes to promote sustainable mobility.

On this page, you will find the public transport we recommend you use to access the Palais des Congrès d'Issy: